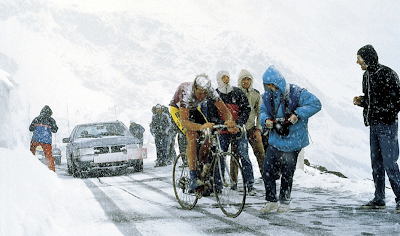 In 1988, American Andy Hampsten attacked in a snowstorm on the slopes of the Gavia, and took over the lead of the Giro d’Italia. It was the first shining moment in American road cycling history, resulting in the first American to win a European Grand Tour (and the only American–to this day–to win the Giro d’Italia). Where is the Gavia? Why, in the Dolomites, of course! The Motirolo, the Zocolan, the Stelvio and Tres Cimes–all famous Dolomiti peaks, along with the Gavia–determine how the Giro is won and lost pretty much every year.

Thus, the Bike Boyz, deep into fantasy and age denial, arrive in Venice and transfer 2 hours north to Cortina–home of the 1956 Winter Olympics–to test their mettle against these legendary limestone massifs. Well, not limestone, exactly–dolomite–but we’ll get to that later.

The Bike Boyz are another year older and appear to be less brash. Is this because ‘age promises wisdom?’ Obviously not, or we’d be riding from winery to winery somewhere in the Loire Valley rather than staring at the steep ramps of the Dolomiti. This year’s trash-talk (via email, of course) has mostly taken the form of photos showing alleged cyclists eating pastries or drinking coffee. Maybe we just know each other too well in this fifth consecutive year of tackling Europe’s epic cycling climbs. Or maybe advancing age means the Boyz are just too tired after a training ride to crow about it. Or maybe we’re intimidated by the legendary bad weather and grueling climbs ahead.

Whatever the source of our quietude, we already have our first casualty. Rich “Ride Commish” Enthoven has just emailed (on arrival day, no less) to say he won’t be boarding his flight “for business reasons.” He’s bagging it without a pedal stroke! It’s a story sure to receive a lot of scrutiny. Is Rich wiser or wimpier than the rest of us? We’ll see how the story unfolds…..